WASHINGTON (AP) — The Supreme Court on Thursday said it would for now continue to allow women to obtain an abortion pill by mail during the COVID-19 pandemic.

The action came over the dissent of two conservative justices who would have immediately granted a Trump administration request to reinstate the requirement that women must visit a hospital, clinic or medical office to obtain a pill.

The court did little more than defer its first action on an abortion-related issue since the death of Justice Ruth Bader Ginsburg last month. The court called for a lower-court judge to take a new look at the issue and rule within 40 days. That would put any further high court action after the Nov. 3 election.

The court said in an unsigned opinion that it was holding the administration’s appeal “in abeyance.”

The administration is asking to be allowed to enforce a U.S. Food 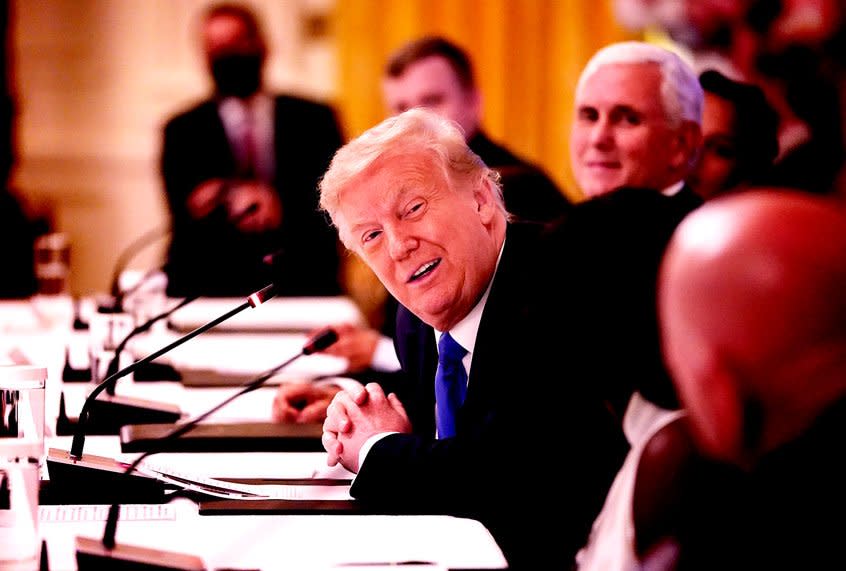 U.S. President Donald Trump speaks during an event with citizens positively impacted by law enforcement, in the East Room of the White House on July 13, 2020 in Washington, DC. The president highlighted life-saving actions by law enforcement officers and cited these examples as a potential negative effect that defunding the police would have on the lives of Americans. Drew Angerer/Getty Images

Consumer advocacy group Public Citizen on Thursday accused President Donald Trump of a “transparent and pathetic attempt to bribe” seniors for their votes after Trump vowed to send $200 prescription drug discount cards to more than 30 million Medicare recipients just weeks ahead of the November election.