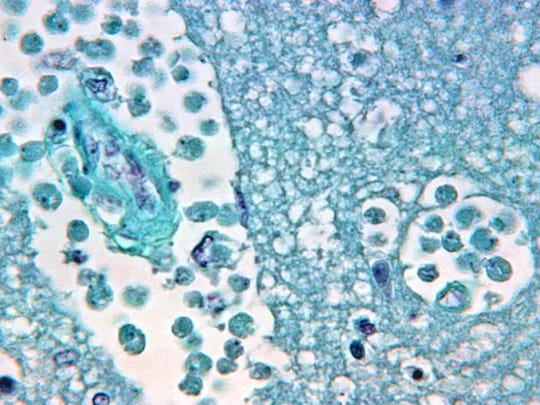 Brain tissue was attacked by Naegleria fowleri, also called “the brain-eating amoeba.” When the amoeba infects the brain or spinal cord, it can cause meningitis. (Photo: George R. Healy, CDC)

LAKE JACKSON, Texas – Environmental officials in Texas have lifted a warning for a final Houston-area community to stop using tap water because it might be tainted with a deadly brain-eating microbe, but with a warning that the water should be boiled before being consumed.

The investigation into his death led to the detection of the brain-eating amoeba after heath officials conducted water sample tests, Lake Jackson City Manager Modesto Mundo said in a news release Saturday.

Three of 11 sample tests indicated preliminary positive results for the brain-eating microbe, with one sample coming from a hose bib at the boy’s home, Mundo said.

Previously: Water in the Houston area may be tainted with deadly brain-eating microbe, officials say

The Texas Commission on Environmental Quality late Saturday lifted a warning for Lake Jackson not to use the water and replaced it with a notice to boil the water for drinking and cooking. They also advised residents to prevent water from getting into their nose when bathing, showering, swimming and washing their face.

TCEQ said it is working with city officials to flush and disinfect the water system. Until the flushing and disinfecting process is complete, the city remains under the boil notice.

“During this period of disinfection and flushing, boiling the tap water makes it safe for drinking and cooking,” according to a statement from the commission. “Naegleria fowleri is a type of amoeba that can be managed using standard treatment and disinfection processes.”

The commission warned the Brazosport Water Authority late Friday of the potential contamination of its water supply by naegleria fowleri and initially warned eight communities not to use tap water for any reason except to flush toilets.

Naegleria fowleri is a free-living microscopic amoeba, or single-celled living organism commonly found in warm freshwater and soil, according to the U.S Centers for Disease Control and Prevention. It usually infects people when contaminated water enters the body through the nose. From there it travels to the brain and can cause a rare and debilitating disease called primary amebic meningoencephalitis.

The warning was lifted earlier Saturday for the other seven communities. The city of Lake Jackson, with more than 27,000 residents, is the site of the authority’s water treatment plant. The advisory also was canceled for two state prisons and Dow Chemical’s massive Freeport works.

TCEQ said it is working with city officials to flush and disinfect the water system. Until the flushing and disinfecting process is complete, the city remains under the boil notice.

“During this period of disinfection and flushing, boiling the tap water makes it safe for drinking and cooking,” according to a statement from the commission. “Naegleria fowleri is a type of amoeba that can be managed using standard treatment and disinfection processes.”

The authority’s water source is the Brazos River.

The infection is usually fatal and typically occurs when people go swimming or diving in warm freshwater places such as lakes and rivers. In very rare instances, naegleria infections may also occur when contaminated water from other sources (such as inadequately chlorinated swimming pool water or heated and contaminated tap water) enters the nose.

The contamination of U.S. treated public water systems by the microbe is rare but not unheard of.

Amy Coney Barrett: What politicians from her home state of Indiana say about her Supreme Court nomination