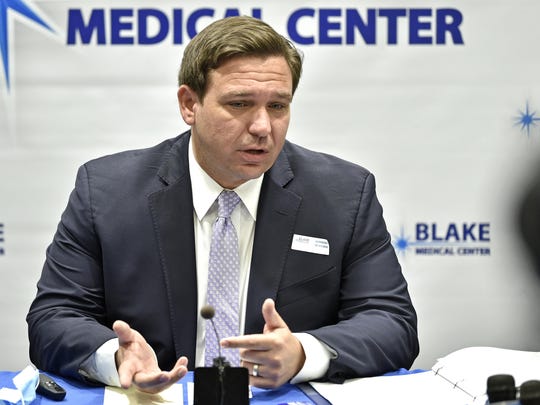 Seniors and school children will be the beneficiaries of more than 6.4 million rapid-result coronavirus tests that will soon be arriving in Florida, Gov. Ron DeSantis said at a press conference Tuesday.

In a development the state’s emergency manager heralded as “a game-changer” in the fight against the deadly virus, the federal government has begun delivering the tests to the state’s roughly 4,000 long-term care facilities, DeSantis said.

On top of that, the state by Friday will get its first shipment of 400,000 of the antigen tests. They are similar to pregnancy tests and can deliver results in about 15 minutes.

With nursing homes being taken care of by the federal government, DeSantis said he plans to send the state’s share of the tests to senior centers, large retirement communities and schools.

Keith Myers, president and CEO of Morselife Health System, said the West Palm Beach nursing home and assisted living center already received 200 of the test kits and expects another 200 will arrive soon so he can test his entire staff.

“This is like a gift,” he said, “It’s made it a much easier process and you don’t have to wait 48 hours for the results.”

The only rub for some in line to get the tests is that under current guidelines they have to be administered by a nurse. DeSantis said he’s hoping to get a waiver from federal health officials so the tests can be given by other trained personnel.

“Quite frankly, this isn’t a good use of a nurse’s time,” DeSantis said, holding up one of the credit-card-sized tests that can fit into a pocket.

The Palm Beach County Health Care District, which provides nurses at 167 public schools in the county, said they have been preparing since June for the release of the rapid tests.

School nurses are being trained to administer them, said Robin Kish, spokeswoman for the tax-funded district.

The announcement of the looming arrival of millions of rapid-result tests came as the Florida Health Department reported that the number of new COVID-19 cases and deaths spiked again after a two-day drop that often occurs over the weekend.

Statewide, an additional 3,266 people were diagnosed with the highly contagious respiratory disease, bringing the state’s total case count to 704,568.

An additional 106 deaths were reported, pushing the state’s death toll to 14,313. Late Monday, the number of deaths worldwide passed the 1 million mark, according to a coronavirus tracker operated by Johns Hopkins University.

Palm Beach County notched an additional 175 cases and seven deaths of people ranging in age from 70 to 94. That means 46,485 people in the county have been infected and 1,371 have died since the pandemic began sweeping the state in March.

With school buildings open in every county in Florida except Miami-Dade and Broward, some doctors have pushed for the rapid-result tests, saying that is the only way to assure outbreaks don’t occur in small, air-conditioned classrooms.

DeSantis also said that school testing is important. But, instead of focusing on outbreaks, he said, the tests would help prevent kids from being quarantined unnecessarily.

“Some schools are isolating people who may have been in contact with someone who is infected,” he said during the press conference in Clearwater. “That is frustrating many parents and I understand that.”

The 15-minute test will allow children who aren’t infected to prove it so they can return to the classroom.

The antigen tests are less sensitive than the types of tests offered at drive-thru testing sites throughout the state.

The so-called PCR tests look for pieces of the coronavirus and often detect dead virus long after a person has ceased to be contagious, DeSantis said. The tests also have to be analyzed by a lab, which can take as long as a week to produce results.

The rapid-result antigen test looks for proteins that make up the coronavirus to determine if the person has an active infection.

“These are going to be more accurate and you’ll have less false positives,” he said.

Abbott Labs, which got FDA approval to distribute the test, says the tests are 98% accurate.

Experts agree with the governor that the antigen test is likely to produce fewer false positives.

Instead, it produces more false negatives, medical experts said. Because of that, some experts say all negative tests should be followed by PCR tests to assure the results are accurate. That would prevent someone from unwittingly spreading the virus to others.

Many experts have urged caution, adding that care must be taken to make sure it is administered properly.

Myers said he isn’t worried. From what he has read, he said, the tests are highly accurate. “The 15-minute results allow us to make immediate decisions without waiting 24 hours,” he said.

Jared Moskowitz, the state’s emergency management director, shared DeSantis’ enthusiasm about the arrival of the tests in Florida, particularly since the $5 cost of each test will be borne by the federal government

In addition to sending thousands of tests to senior centers, retirement communities and schools, he said, his agency is considering making them more readily available at the state’s drive-thru testing sites.

In Palm Beach County, they are offered only by appointment at the testing center at the  FITTEAM Ballpark of the Palm Beaches.

The arrival of the tests comes as nearly every business in the state is allowed to be open. DeSantis on Friday ordered that all of the state’s 67 counties move into Phase 3 of restrictions designed to curb the spread of the virus.

Palm Beach County Mayor Dave Kerner, who initially said he thought the county should restrict restaurants and other businesses to 50% occupancy, on Tuesday said further discussions with the governor’s staff convinced him otherwise.

All businesses will be allowed to operate without occupancy restrictions, county officials said in an order Tuesday evening. Social distancing requirements and a mask mandate will remain in place.

Dr. Anthony Fauci, the nation’s top infectious disease specialist, on Monday said DeSantis’ decision to allow restaurants to operate fully was a mistake that could cause cases to spike.

He dismissed a small study published last month by the U.S. Centers for Disease Control and Prevention that found that those who reported they had dined out in the previous 14 days were twice as likely to be infected.

The study involved only 314 people and those who tested positive could have easily picked it up from family in their homes, DeSantis said.

When cases began surging in July, Miami-Dade County closed its restaurants while Broward let them remain open. The number of new infections were similar in both counties, he said.

Even if cases spike, he said, he is not going to reverse course. The nearly two-month statewide lockdown that began in March was an economic disaster, he said.

Further, he said, the number of cases is largely irrelevant. Cases spiked in Leon and Alachua counties when students at Florida State University and the University of Florida returned to classes. But he said that few, if any, students got seriously ill.

He said the pattern has repeated itself in K-12 schools when children returned to classrooms in other parts of the state in August.

“Efforts to reopen our classrooms should not happen in the dark,” said U.S. Rep. Ted Deutsch of Boca Raton, and 23 other Democrats who signed the letter. “If the Trump administration is truly committed to alleviating fear, reducing the risk of harm introduced by keeping kids out of school …the CDC must step up to do the vital public health work necessary to understand and respond to COVID-19 transmission in our schools.”

A state report showing how many students in Florida had contracted the disease after schools reopened disappeared shortly after it was posted on the health department’s website about a month ago.

DeSantis said he would be happy to publish the numbers. “I would like to see it out. You know why? It’s a good story,” he told reporters.

On Tuesday evening, state health officials posted a report on infections in schools on its website. The report, that records cases from Sept. 6 through Saturday, shows students and staff have tested positive at 34 public and private K-12 schools in the Palm Beach County.

DeSantis continued to insist that the key metrics are the number of visits to emergency rooms and hospitalizations for COVID-19 among all age groups.

There was a slight jump Tuesday in the number of people hospitalized for treatment of COVID-19 throughout the state, according to the Florida Agency for Health Care Administration.

It reported 2,174 patients being treated at mid-day, about 80 more than 24 hours earlier. However, the figures change throughout the day as people are admitted and discharged.

In Palm Beach County, the number of people hospitalized stayed about the same as Monday with roughly 115 people being treated at local medical centers for COVID-19, the agency said.

The percentage of people in Florida testing positive for the virus inched above the 5.0% mark recommended by health officials for the first time in five days. The 5.01% positivity rate pushed the state’s 14-day average daily level to 4.56%

In the county, the rate that indicates the prevalence of the disease increased to 4.14%, a day after dropping to nearly 2.0%. Over the past two weeks, the daily average was 3.8%.

Health experts say it must consistently stay below 5.0% before any meaningful steps can be taken to curb the spread.