© Provided by The Financial Express
He also expressed happiness at knowing that the other staff members who had contracted the disease in the Vice President Secretariat had also recovered from Coronavirus.

Vice President Venkaiah Naidu has credited his speedy recovery from Coronavirus to his physical fitness, mental tenacity and desi food. In a long blog posted from his facebook account, the Vice President said that he firmly believed that it was his physical fitness and strict adherence to traditional food which ensured his recovery from the disease despite his old age and him being a diabetes patient.

“I could overcome COVID-19 infection because of my physical fitness, mental tenacity, regular physical exercise like walking and yoga, apart from eating only desi (traditional) food,” the Vice President wrote in his blog. He also said that he always preferred to eat traditional food and continued the practice during the quarantine period

House Speaker Nancy Pelosi unveiled legislation Friday that would allow Congress to intervene under the 25th Amendment to the Constitution to remove the president, insisting it’s not about President Donald Trump but inspired by the need for greater congressional oversight of his White House.Pelosi has been raising questions about Trump’s mental fitness since his COVID-19 diagnosis and demanding more transparency about his health. The bill would set up a commission to assess the president’s ability to lead the country and ensure a continuity of government. It comes one year after Pelosi’s House launched impeachment proceedings against Trump.“This is not about President Donald Trump — he will face the judgment of the voters,” Pelosi said at a press conference at the Capitol.Just weeks before the Nov. 3 election, with no hopes of the bill becoming law, the rollout was quickly dismissed as a stunt by Trump’s team and top allies.“It’s an … Read More

Regeneron announced Wednesday night that it has asked the Food and Drug Administration for emergency use authorization for the experimental coronavirus antibody therapy used to treat President Donald Trump after he tested positive for the virus.

The biotechnology company said in a statement that it made that emergency use request for its REGN-COV2 investigational antibody combination for COVID-19. If the emergency authorization is granted, the government has committed to making it available to Americans at no cost and would be responsible for its distribution, the statement said.

Enough doses are currently available for 50,000 coronavirus patients, and the company expects to have 300,000 doses within the next several months.

Cartoons on the Coronavirus

The experimental treatment is still in large-scale clinical trials but has been available for compassionate use, something the FDA approves on a case-by-case basis, such as the case with the president.

REGN-COV2 is a combination of 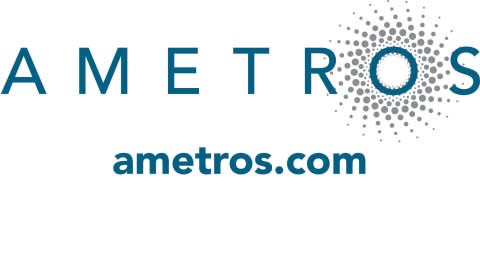 “Nicole’s strong background in workers’ compensation, working with insurers, third-party administrators and other stakeholders in the settlement process, makes her well qualified to support our clients and partners and guide injured individuals through the settlement process,” said Mark Doherty, Executive Vice President of Sales.

Chappelle brings 28 years of experience to this newly created position, most recently as Claims Auditor Claims Central Audit for AmTrust Financial Services. She is a former Assistant Vice President for Gallagher Bassett and has served in litigation management, hearing representation, and claims supervision for several insurance companies. She started her career with Travelers Insurance.

Chappelle earned her Bachelor of Arts degree from the University of California in Santa Barbara and her expertise spans workers’ compensation statutes, regulations, and case law.

WASHINGTON — President Donald Trump’s physician says the president had been symptom-free for 24 hours and his vital signs have remained stable and in normal range.

Dr. Sean Conley, in a memo, also wrote that Trump, who was diagnosed with COVID-19 five days ago, told him “I feel great!”

Conley didn’t detail which medications the president was taking. He says the president has not required any supplemental oxygen since returning to the White House late Monday.

The president had also been fever-free for four days.

(This item has been corrected to show Trump’s doctor is Sean Conley.)

— What do we know about superspreader events in the pandemic?

— Eli Lilly and Company has asked the U.S. government to

President Donald Trump didn’t want to go to the hospital in the first place. Trump was admitted only after Chief of Staff Mark Meadows insisted he leave the White House when he spiked a fever Friday morning, was coughing and his blood oxygen level threatened to dip dangerously low, say two current White House officials. All along, Trump’s been a challenging patient, insisting on shaping the course of his care as well as stage managing how his health is projected to the public.

After being shuttled to Walter Reed National Military Medical Center by helicopter on Friday evening, Trump pressed to be sent home all weekend. He pushed his doctors to find a way to administer back at the White House the aggressive therapies he’s been receiving. On Monday, he announced his hospital discharge on Twitter hours before it happened, a tactic he’s often used to ram through a 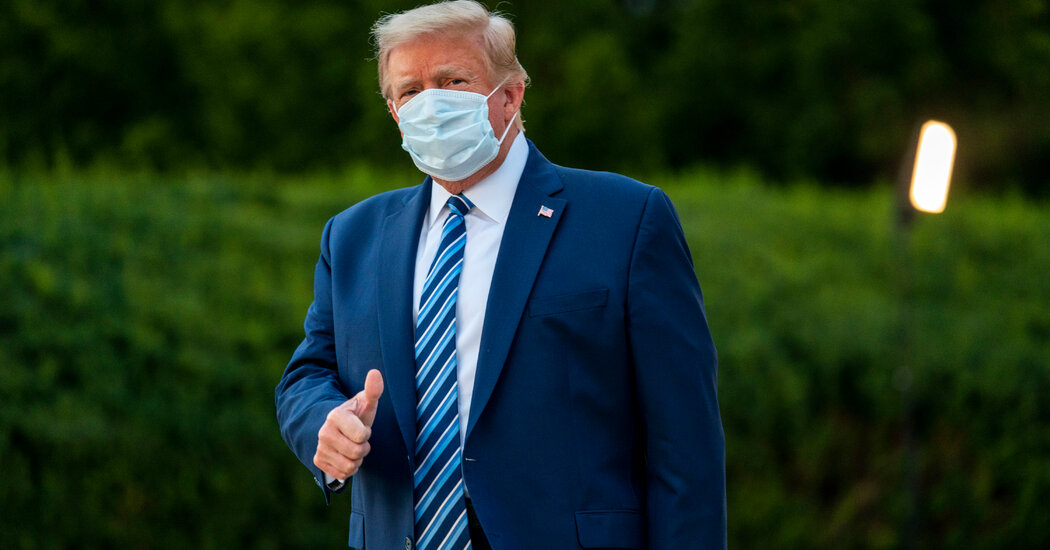 Most people returning home from a stay in the hospital — especially people struggling with Covid-19 — use the time to rest and recuperate.

But if Tuesday was any indication, President Trump plans no such thing. The day was a blur of tweets and retweets (25 by dinnertime): attacks, major policy pronouncements and assurances to his followers that he was “FEELING GREAT!”

He ordered his aides to cut off negotiations with Democrats in Congress on the emergency rescue package for an economy pummeled by Covid-19 and urged Senator Mitch McConnell, the majority leader, to push ahead with his nomination of Amy Coney Barrett to the Supreme Court. He mocked “Fake Polls” that showed former Vice President Joseph R.

“I wish the president would wear the mask more,” DeWine told reporters. “I wish he’d wear it all the time when he was in public. I said that before he had the coronavirus.”

Trump revealed early Friday that he tested positive for COVID-19 and then spent three days at Walter Reed National Military Medical Center. He returned to the White House Monday, tweeting “Don’t be afraid of Covid. Don’t let it dominate your life.”

DeWine said Ohioans should not be afraid of the virus, but they should not discount it either.

“Even the leader of our great country can get the virus,” DeWine said. “It can happen to anyone. No one is immune.”

President Donald Trump returned to the White House after three days at Walter Reed. He removed his mask on the steps of the balcony.

President Donald Trump rolled out of Walter Reed hospital confidently urging the nation not to fear the coronavirus despite experts warning the U.S. death toll, at more than 210,000, could almost double by year’s end.

Experts also warn that the commander-in-chief himself may not have seen the worst of the virus just yet.

“Don’t be afraid of Covid,” Trump tweeted hours before his release Monday following a three-day hospital stay. “Don’t let it dominate your life.”

Dr. Anthony Fauci, the infectious disease expert who for months has exhorted the nation to wear masks and social distance, told CNN that, while not likely, Trump could still face “a reversal – meaning, going in the wrong direction and get into trouble.” 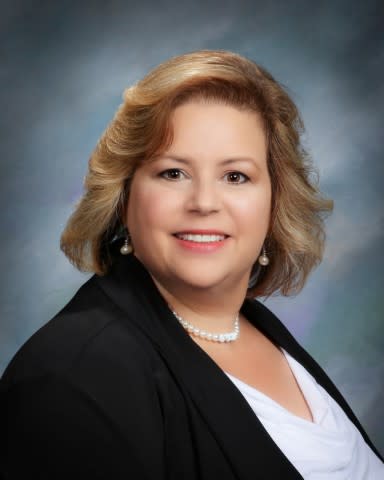 Laurie Delgado, who over the past two decades has overseen Medicare appeals and grievances for two of the nation’s largest and most highly respected health plans, has been named vice president of appeals and grievances for Beacon Healthcare Systems, effective immediately. Beacon is home to the health care industry’s leading compliance and risk management technologies.

For the past five years, Delgado has served as director of Medicare grievances and appeals for Anthem where she led and developed a team of over 120 staff, including clinicians, auditors, analysts and support personnel to achieve a level of excellence in handling customer appeals with strict compliance of regulatory processes and