President Donald Trump is protected at the White House by snipers, sensors, a new 13-foot-tall fence, and a dozens-strong force of Secret Service agents, but none of that managed to keep out the deadly and wily virus that infected him and has killed more than 211,000 Americans.

Nonetheless, the President went back to the Oval Office on Wednesday, less than 48 hours after being released from Walter Reed National Military Medical Hospital and still undergoing aggressive treatment. Medical experts warn that Trump may face a challenging, second-week phase of COVID-19 and could still be contagious.

Trump insisted on working out of the iconic office anyway, and was briefed by aides about the pandemic aid package talks with Congress — which he temporarily cut off in a tweet on Tuesday — and Hurricane Delta’s threat to the Gulf Coast, said White House Deputy Press Secretary Brian Morgenstern. To accommodate the President while he is ill, the Oval Office’s ventilation system was upgraded to change and filter the air more frequently, Chief of Staff Mark Meadows said Wednesday. Staff seeing Trump in person are asked to wear a yellow gown, mask and goggles.

Seven months into the pandemic, there’s a newfound realization among White House staff that they relied too heavily on a rapid testing regime to alert them to COVID-19 in their midst, and didn’t do enough to enforce that masks be worn and distance be kept, measures recommended by federal health officials for months and used in workplaces around the country. Over the course of the last week, it has become clear that the West Wing is part of a COVID-19 hotspot in the nation’s capital, infecting Trump and at least 10 White House officials, with more than 100 believed to have been infected in Capitol Hill offices, and leading senior military officials isolating themselves.

Trump’s decision to leave the main residence of the White House and work from his office was seen by many as another example of the President’s disregard for those around him, his willingness to put his staff at risk, and his unwillingness to be a model for responsible public health recommendations that could stem the spread of the virus. It echoed Trump’s insistence on Sunday evening that a Presidential limousine driver and two Secret Service agents risk being exposed to the virus while riding with him while he waved through the car’s bullet-proof glass to supporters outside Walter Reed hospital.

As the scale of the outbreak has come into focus, the White House leadership has now told the few still working in the cramped West Wing to space themselves apart in meetings and cover their faces, after months of actively discouraging staff from wear masks and not keeping their distance in meetings. 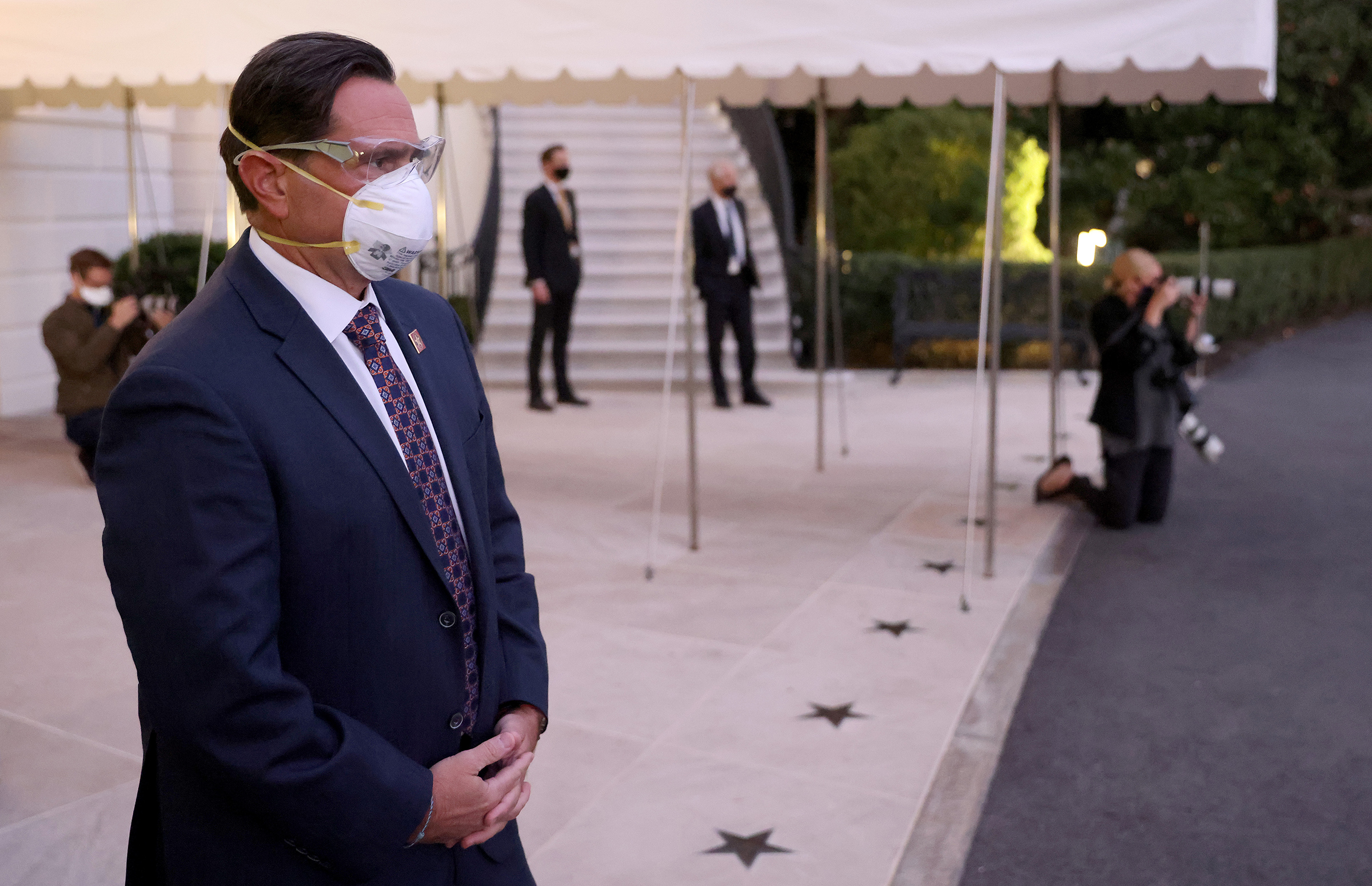 But given President Trump’s publicly stated dislike for masks and social distancing measures, how long will the White House be able keep that up? A White House official says that having Trump come back to the White House is concerning at a time when so many West Wing staff are testing positive for COVID-19. “This is a dangerous moment” for Trump and for officials working closely with him, the official says. There’s also a lot of uncertainty about the trajectory of Trump’s health. “He’s clearly feeling a lot better, but this disease is pretty sneaky,” the official says.

The spate of infections in Trump’s orbit came at a moment when the White House decided to change its testing protocols, adding a new rapid antigen test into its procedures that experts say sometimes only finds evidence of COVID-19 slightly later in the cycle of the infection. For months the White House has been testing officials and people meeting with Trump using Abbott’s 15 minute ID NOW molecular test and recently switched part of its testing process to a new Abbott rapid test called the BinaxNOW, which can be used on a large scale and detects the presence of antigen proteins. “Just as the West Wing exploded with disease they switched to an antigen test,” the White House official says, pointing out that antigen tests can miss some people who are in a slightly earlier stage of the disease.

The change of tests alone wasn’t what left the White House and President Trump so vulnerable to the spread of the virus, says Dr. Ashish Jha, dean of the Brown University School of Public Health. More concerning, he says, is that they considered testing a barrier to infections, when it should have been considered just one step, along with mask wearing and social distancing, “It’s almost amateur hour they way they use the test,” Jha says.

The White House needs to limit the number of people coming into the building to meet with the President in person, require Trump and people around him to wear masks, and maintain appropriate physical distance, Jha says. “These guys did almost none of that,” Jha says. “It was through sheer luck they made it all the way to the end of September” without a major outbreak, he says, “given what a lousy job they were doing protecting the President and keeping the White House safe.”

For months, the White House didn’t seem to “grasp the concept” that the safety precautions in place — or not in place — around Trump impact the entire country, says Dr. Michael Mina, an epidemiologist at Harvard T. H. Chan School of Public Health. “It’s not about Trump. It’s not about the White House. It’s about the American people. I don’t think that they’re getting that. That his security affects all of us, in some way or another, the economy, individually, however it might affect America and the globe,” Mina says.

The White House’s own safeguards “should be the shining example of how to stop an epidemic,” he says. Infectious disease experts will be watching to see if the White House, and the President, can provide that example.

The Coronavirus Brief. Everything you need to know about the global spread of COVID-19

For your security, we’ve sent a confirmation email to the address you entered. Click the link to confirm your subscription and begin receiving our newsletters. If you don’t get the confirmation within 10 minutes, please check your spam folder.